Live at The Garage, London

Space embark on the UK “Music for Pleasure Music for Pain Tour” followed by the album of the same name, Space have released the bands anthology CD boxset via Demon Records in November 2019 – the 6 CD boxset includes “Spiders, Tin Planet, Love you More Than Football, Suburban Rock and Roll, Attack of the Mutant 50ft Kebab and the 6 th CD containing B-Sides and Remixes.

The band’s last studio album Give Me Your Future was recorded and produced by Grammy and Brit award winning producer Steve Levine who also worked with The Clash, Culture Cub, Beach Boys, Denice Williams and Gary Moore to name a few. The bands 1990’s hit Female of the Species making the top of the album charts with the “TFI Album” – (Number 1 in June 2015) and the 2009 re-release of the of the single achieved a silver award with BPI. Tommy, Franny and the boys all said they are very proud of the “Give Me Your Future” album Tommy said working with Steve Levine was amazing, the man gets into your head to imagine the sounds you want before you have played them, a true genius, this record is the most Space record we have ever made and we all look forward to sharing the record with you all… 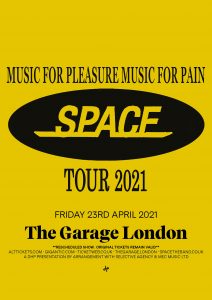 GET IN THE MOOD WITH OUR SPOTIFY PLAYLIST

Lawnmower Deth Show Moving To 2021 Thu.24.Sep.20 We’re sorry to say that our Lawnmower Deth show is moving from 19th December 2020 to 18th December 2021. BUT they will still be joined by Raised By Owls and Footprints In The Custard, so not all bad news. All tickets for the 2020 show of course remain valid for 2021, and if you haven’t […]
Follow on Instagram